Dear Friend,
By clicking on the link it appears that you wish to know more about me, the person behind the easel. OK, let’s dig in. I’m rather eccentric and I’ve had a long and interesting life. My mother, who essentially raised me, was a true adventurer. She taught pilots in WWII, went on to have her own airport in Bisbee AZ, and finally settled in Ireland where she started a model dairy farm and collected more whippets and greyhounds than I care to remember. She also had a weakness for good Irish whiskey, bless her soul.

I was sent to a posh boarding school, which I hated. Early on I understood two things: 1) Just about everybody has an agenda..and they want you onboard. 2) our senses lie to us. The information we get from them is misleading and can lock us into to all kinds of mischief. Armed with this knowledge I skipped college and studied in the atelier of a well known New York artist. I mixed his paints from powder, readied his coal stove each morning pending his arrival in the studio and did a host of other chores in return for instruction. At the time he became such a father figure that it took me decades to discover that, while he taught me how to paint very well, I really didn’t want to paint – or be, like him. Yet I am to this day very grateful for the artistic tools he passed along to me.

While in New York City in my early twenties I began to study the mystics. Writers like Oespensky, Gurdjieff, Merton, Schweitzer ( and many other like minded souls ) filled my spirit with a yearning for truth. But it was not until I reached 30 that I found my Guru, Paramahansa Yogananda. Many of you probably know of him. For those who don’t I would recommend THE AUTOBIOGRAPHY OF A YOGI. It is the book that changed my life.

For the first time, an enlightened soul actually proffered techniques for raising one’s consciousness up the spine to produce profound altered states of realization. Though he had died in 1952 a few years before I became spiritually active, I did meet many of his direct disciples at the centers he had established in Los Angeles and Encinitas. And I came to understand that the techniques (Kriya Yoga) did indeed produce the results he came to the West to reveal and promote.

I will skip over the many events and boatloads of karma that befell me over the next half century. Suffice to say I soured on the art world, started several businesses, married more than once and struggled over the decades to find myself. And if you can believe it..I feel that this website is the beginning of my true artistic life. Several years ago I met Amma. (THE ‘HUGGING’ SAINT). Almost reluctantly at first, I added her picture to my meditation altar. But I soon felt her power in the form of unusual spiritual experiences and her ‘presence’, which is pervasive and immediate. She has no judgement of others, only Love.

Speaking personally, I have found that Amma has the power to engage the consciousness of her devotees. She has become my spiritual muse. She has brought my art back to me and made it whole. The spiritual paintings you see on this site are among the first of many I hope to produce if the Lord gives me life to do so. My goal is simply to engage the consciousness of others, to make viewers feel spirituality in the subject matter and the presentation. If poetry is suggestion, then I want to suggest God in my art. For now I’ll leave it at that. Most of the spiritual paintings shown here are available as posters in two sizes, on archival stock and personally signed by me. The price includes shipping within the USA. All editions are limited, usually to 1,000 pieces. However, the portraits of the Masters will have a 3,000 limit so as to reach more devotees. In peace and Love, Huntington Barclay Feel free to contact me by email (hunt@roadrunner.com) if you have any questions or want to share your own experiences.

The Wind River Range in Wyoming is a well kept secret among wilderness hikers. Over 1,000 lakes compliment it’s snow capped peaks. For more than 15 years I have wandered it’s recesses and listened to spirit voices whisper in the clear mountain air. A week a year in the ‘Winds’ equals renewal of body and spirit. Guaranteed.

I live on 3 mile long Silver Lake in N.Central New Hampshire. When my son Ansel (now 14) was 8, he expressed a desire to be a pirate. Naturally I got to work building a vessel suitable for marauding, plunder and general pirating. He and his mates have enjoyed many happy hours jumping off the 10’ roof platform brandishing foam swords and yelling AAArrrgghhh! We’ve even taken the barque for week long expeditions on giant Lake Winnepesaukee, to the wonder of it’s shorebound residents. If you see us cruising in your area, beware! We take no prisoners!
AArrrgggh!(again, and again and….etc.) 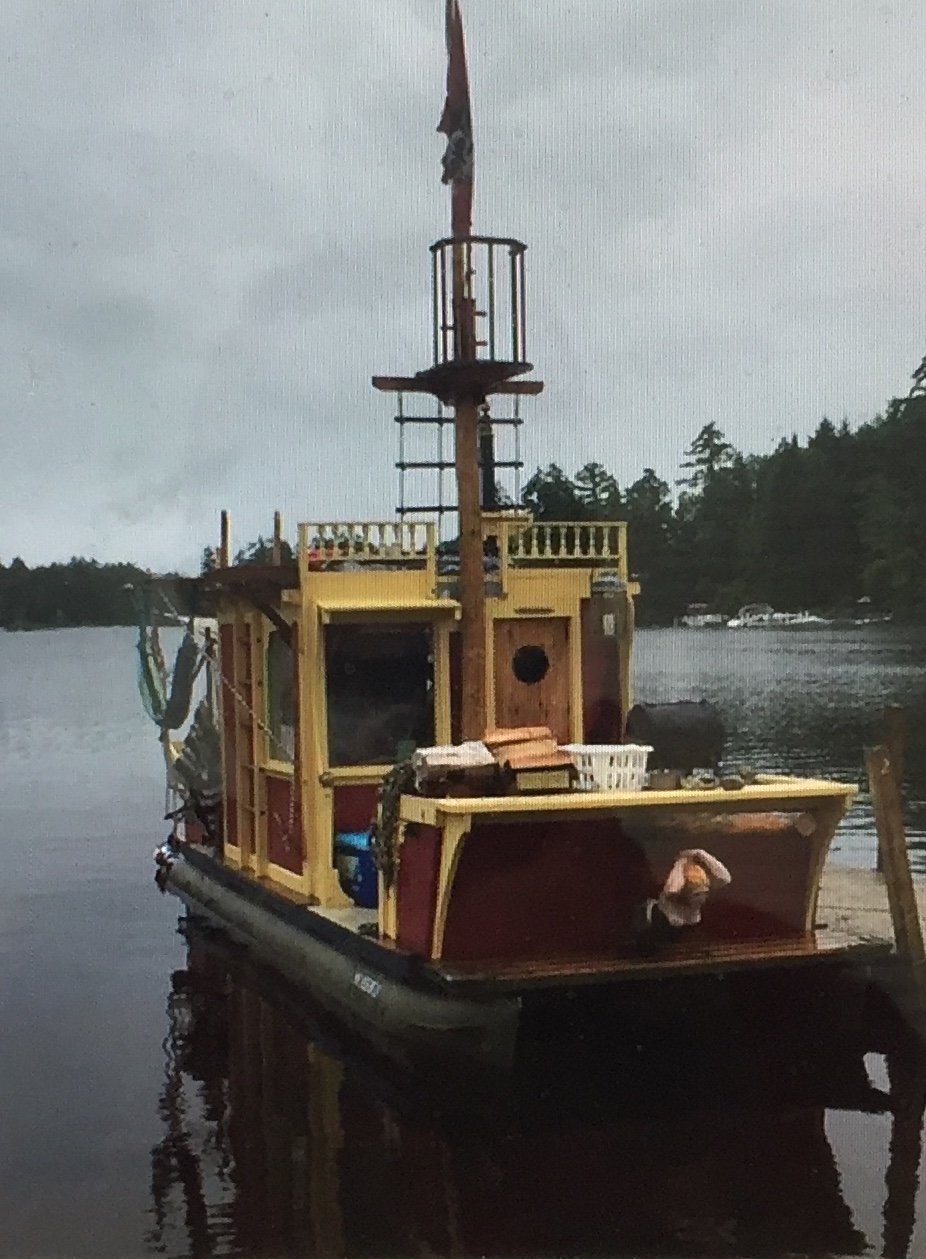